Song for My Father: Memoir of an All-American Family 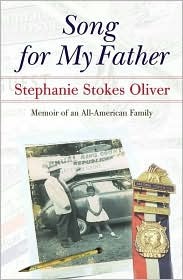 On Election Day in 1960, a classmate of Stephanie Stokes Oliver threatened to beat her up. Why? Because in their class's mock presidential election, Stephanie revealed that she would follow her father's lead and vote for Nixon over Kennedy. Stephanie realized this day that her family was different from most other African Americans at the time: They were Republicans."Song for My Father" is Stokes Oliver's memoir of her father, Charles M. Stokes, a prominent member of the National Republican Party. Known as "Stokey," this pioneering black man in the fields of law, legislation, and politics raised three children in the tumultuous 1960s and 70s, when memories of the Republican Party as the party of Abraham Lincoln -- and association of the party with the emancipation of slaves -- had faded. As Stephanie came of age, she and her father disagreed on everything -- especially politics -- but they were bound by mutual love and respect.

Born in Kansas in the early twentieth century, Charles M. Stokes established himself in his home state as a lawyer and a Republican leader before moving in 1943 to Seattle, where he was the only black attorney in private practice. He later became Seattle's first black state legislator and served as Washington State's first African-American district court judge. When he ran for lieutenant governor in 1960, Stokes was narrowly defeated in the primary, but his political race blazed a trail for other African Americans in both local and national politics.

This is Stokes Oliver's tribute to a larger-than-life father, but it is also the inspiring story of an American family who worked, struggled, dreamed, and succeeded.