In Global Warming We Trust: Too Big to Fail, The Stairway Press Revised and Expanded Edition 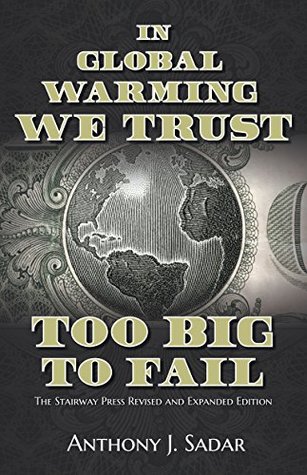 From the Foreword to the new edition:

The climate has not changed much since the summer 2012 release of *In Global Warming We Trust: A Heretics Guide to Climate Science* -- at least not much for the promoters of global climate doom. Yes, the disaster-monger tactics have changed somewhat, their hysteria has increased a bit, and much more money and politicking have been devoted to their dubious cause.

The August 3, 2015 release of the Obama Administration’s Clean Power Plan is the grand case in point. But, regardless of high-level machinations, the climate keeps operating as usual, changing in its substantially natural way.

No matter, trusting continues big time! After all, in essence what are far-ranging outlooks of global climate conditions -- especially those fine-tuned for local areas? They are at best educated guesses by purportedly really smart people, and as such require trust by lesser entities, including other really smart people who don’t have advanced degrees in climatology.

So, it comes down to trust, and the fact that people will believe what they want to believe, or are compelled to believe.

Yet, what if there are some really intelligent, independent, scientifically-minded folks out there with some impressive credentials, a lot of real world experience, and a dash of objective common sense who question the ability of those other purportedly really smart people to be so utterly certain of their own prophetic powers? Would the input from the really intelligent, independent, scientifically-minded folks have any value in a free society, especially a society required to pay the bill for an enormously expensive gamble that the purportedly really smart people actually know what they’re talking about?

And, we certainly are paying the bill. The federal government alone has poured billions of our tax dollars into research directed at substantiating preformed conclusions that humans are responsible for disastrous climate change and that increased carbon dioxide (“carbon pollution”) produces only bad effects. Mounds of money are used to prop-up wind mills and solar collectors in the hope of averting an airy adversary in the form of increased severe weather events. In addition, a boat load of our cash floats into “education” of the public and students from grade school through graduate school on the culpability of people for climate catastrophe.

Like the giant financial institutions, the “climate-industrial complex” -- as former U.S. Environmental Protection Agency senior analyst Alan Carlin and others have dubbed it -- has now supposedly become “too big to fail.”

But, are we investing wisely? Are there bigger issues out there in the real world that demand our serious financial attention and compassionate focus -- issues that pose a bigger threat to humans and the ecosystem than some potential uptick in temperature levels. Two big threats topping the list are terrorism and abject poverty, both quite destructive to people and the planet, both within the means of our nation to greatly alleviate.