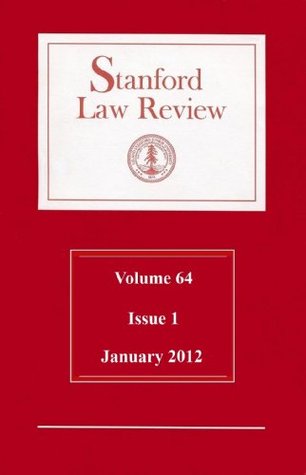 A leading law journal features a digital edition as part of its worldwide distribution, using quality ebook formatting and active links. This issue of the Stanford Law Review contains studies of law, economics, and social policy by recognized scholars on diverse topics of interest to the academic and professional community.

Contents for the January 2012 issue include:

• The Right Not to Keep or Bear Arms
Joseph Blocher

• The Ghost That Slayed the Mandate
Kevin C. Walsh

The Stanford Law Review was organized in 1948. Each year the Law Review publishes one volume, which appears in six separate issues between January and July. This volume represents the 2011-2012 academic year. Each issue contains material written by student members of the Law Review and outside contributors, such as law professors, judges, and practicing lawyers. The journal is edited by students at Stanford Law School.

In the ebook edition, all the footnotes, graphs, and tables of contents (including those for individual articles) are fully linked, properly scalable, and functional; the original note numbering is retained. Also, the URLs in notes are active; and the issue is properly formatted for ereaders and apps. Six previous issues from the 2010-2011 academic year (Volume 63) are also available as ebooks.