A Walking Tour of Jamestown, New York (Look Up, America!) 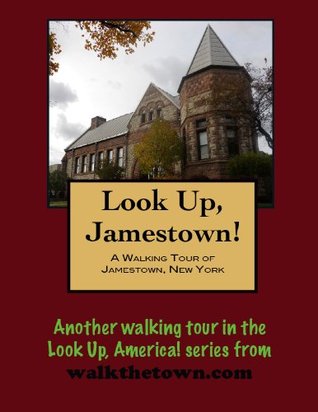 Each walking tour describes historical and architectural landmarks and provides pictures to help out when those pesky street addresses are missing. Every tour also includes a quick primer on identifying architectural styles seen on American streets.

The "James" of Jamestown is James Prendergast, the youngest of eleven children in a family that bought 3,500 acres of mostly pine forest in 1806. James would purchase 1,000 of those acres from his brother for $2 an acre with a mind to starting a settlement and manufacturing lumber at a spot of rapids on the Chadakoin River. By 1809 Prendergast had built a cabin and a dam, a saw mill and grist mill soon followed.

Weathering several fires, Prendergast persevered in his enterprise and in 1815 lots fifty by one hundred twenty feet were surveyed and placed on the market at $50 each. Settlers indeed followed and in 1827 Jamestown was incorporated into a village. Among the early settlers were a number of skilled woodworkers who crafted furniture for the pioneering families coming to western New York.

By 1830 Jamestown was shipping forty million board feet of timber per year and the busy mills chewed up the stands of first class pine timber by 1840. In 1849 Swedish immigrants, many of whom were cabinet makers, began to settle in Jamestown. The first Swedish manufacturer of furniture in Jamestown, Augustus Johnson, began making doors in 1869 and the population would grow to be predominantly Swedish for many generations. By 1920 there were 15,025 people of Swedish birth or parentage in Jamestown, making the Swedes the city's largest ethnic group.

More than 5,000 workers would be engaged by the 1900s in lumber-related factories and Jamestown would fashion itself the "Furniture Capital of the World." Furniture-making remained Jamestown's largest industry well into the 20th century and still has a handful of major furniture plants today.