The Chomsky Effect: A Radical Works Beyond the Ivory Tower 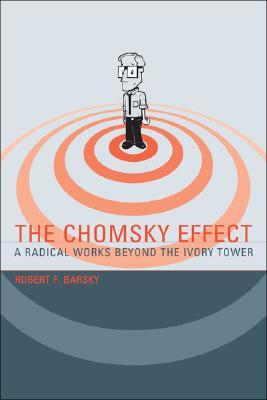 "People are dangerous. If they're able to involve themselves in issues that matter, they may change the distribution of power, to the detriment of those who are rich and privileged."--Noam Chomsky

Noam Chomsky has been praised by the likes of Bono and Hugo Chavez and attacked by the likes of Tom Wolfe and Alan Dershowitz. Groundbreaking linguist and outspoken political dissenter--voted "most important public intellectual in the world today" in a 2005 magazine poll--Chomsky inspires fanatical devotion and fierce vituperation. In The Chomsky Effect, Chomsky biographer Robert Barsky examines Chomsky's positions on a number of highly charged issues--Chomsky's signature issues, including Vietnam, Israel, East Timor, and his work in linguistics---that illustrate not only "the Chomsky effect" but also "the Chomsky approach."

Chomsky, writes Barsky, is an inspiration and a catalyst. Not just an analyst or advocate, he encourages people to become engaged--to be "dangerous" and challenge power and privilege. The actions and reactions of Chomsky supporters and detractors and the attending contentiousness can be thought of as "the Chomsky effect." Barsky discusses Chomsky's work in such areas as language studies, media, education, law, and politics, and identifies Chomsky's intellectual and political precursors. He charts anti-Chomsky sentiments as expressed from various standpoints, including contemporary Zionism, mainstream politics, and scholarly communities. He discusses Chomsky's popular appeal--his unlikely status as a punk and rock hero (Eddie Vedder of Pearl Jam is one of many rock and roll Chomskyites)--and offers in-depth analyses of the controversies surrounding Chomsky's roles in the "Faurisson Affair" and the "Pol Pot Affair." Finally, Barsky considers the role of the public intellectual in order to assess why Noam Chomsky has come to mean so much to so many--and what he may mean to generations to come.

Robert F. Barsky is Professor of English, Comparative Literature, French, and Jewish Studies at Vanderbilt University. He is the author of Noam Chomsky: A Life of Dissent (MIT Press), Constructing a Productive Other, Introduction a la theorie litteraire, and Arguing and Justifying. He is currently completing a book on Zellig Harris, for The MIT Press.