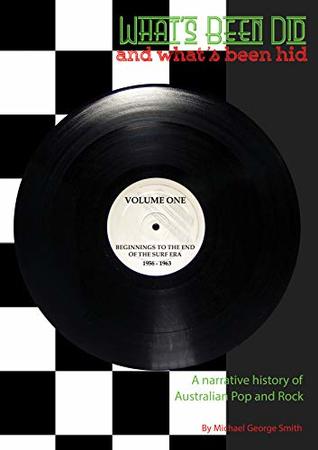 This is the first volume of what at the moment looks like being at least six volumes looking at the evolution of rock and pop in Australia over the past 60-odd years. The title of the series, What’s Been Did And What’s Been Hid, is borrowed from a song by the great Donovan Leitch, who I hope won’t mind, and is so-called because, while it naturally looks at the obvious “highlights”, from Australia’s “first” rock’n’roll star, Johnny O’Keefe through The Bee Gees and The Easybeats to AC/DC, Men At Work and INXS to Savage Garden and so on, each volume looks at the other artists and acts whose creativity not only provided a multiplicity of records, some gems, some best forgotten, many treasured the world over by collectors and fans alike, but also were the musical context within which those artists and acts that did make it worked and therefore were as influential in the development of those artists and acts as the records they were listening to from the UK and the USA. The other things these volumes hope to provide is the broader social context within which this remarkable musical legacy was created and just how far that legacy actually reached, how very much more of it impacted on the musical scenes in the UK and the USA – and Europe – than most people realise. Volume I takes the reader from the beginnings of rock’n’roll in Australia to the end of the surf music era in 1963, just before The Beatles finally broke through in Australia and changed everything. It’s chronological in the sense that I look at artists and acts as they emerge on the local, national and – the few lucky ones – international stage, but within each “band/artist” chapter I look at similar artists and acts, some of them even directly connected to the main artist/act in a sort of “family trees” way, some just because their stories are worth preserving as more and more of their “lost” music is retrieved by fans and released on compilation CDs. I also follow their various careers as far as they went, whether it only produced a single or continues through until today – and you’d be surprised how many of them are still out there performing – and recording. The book is a mix of research and interviews with those participants I’ve been lucky enough to talk to over the years. It’s about the music – whatever the quality or otherwise (no personal judgements or evaluations) – and the musicians. It’s NOT an academic work, but I’ve tried to use academic rigour to get it as right as possible. Enjoy…