Sister in the Band of Brothers: Embedded with the 101st Airborne in Iraq 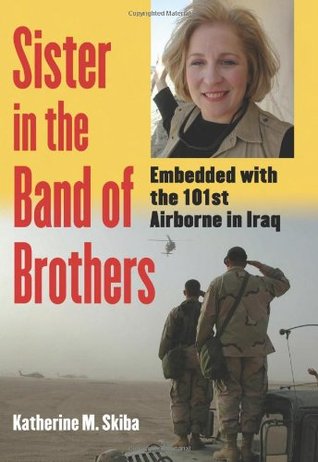 When U.S.-led forces invaded Iraq in March 2003, our soldiers weren't the only ones who put their lives on the line: so did 600 embedded journalists, including Katherine M. Skiba. Her riveting memoir provides a vivid you-are-there account of her experiences with the Army's legendary 101st Airborne, the division celebrated for its heroism in World War II as the Band of Brothers.

Skiba, a reporter and photographer, was the sole female civilian among the 2,300 soldiers of the 159th Aviation Brigade, whose pilots flew Black Hawk and Chinook helicopters into the thick of battle. Her dispatches were a vital lifeline between the troops and their families and earned her a grateful national audience. Reporting on the men and women in uniform with journalistic dedication, natural compassion, and an eye for the absurd, she chronicles her experiences from media boot camp to the kick-off of Operation Iraqi Freedom to the fall of Baghdad, including a missile attack on the brigade's desert camp.

Taking readers across the wind-blown deserts of Iraq and into cramped seventy-man tents, where personal space barely exists and tempers can flare, she deftly and sympathetically portrays her brothers and sisters-in-arms--rigid commanders, gung-ho warriors, and daring aviators, as well as intelligence officers, mechanics, medics, and cooks, among many others. She details her dealings with the soldiers, her clashes with a battalion commander, and her friendship with a lieutenant colonel who helped keep her sane. Meantime she tells of the journalist-husband she left behind--and the encouragement he gave her when the going got rough.

Whether pounding out a story on her laptop, strapping on a gas mask at a moment's notice, or flying toward the frontlines, Skiba stuck it out despite her own doubts and earned the respect of one grizzled sergeant major, who quipped: You've got balls. The risks were very real for her and anyone else who covered or fought in the war, even in its early days, long before triumph trailed off into something less than permanent victory. Her story testifies to the courage it took to endure such risks, while acknowledging the inevitable costs of war.