Sacred Memories: A Journey of Destiny 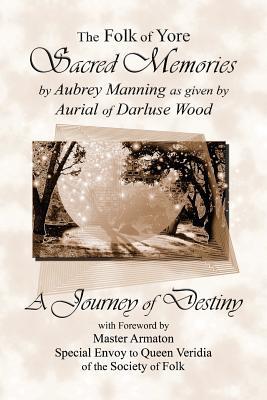 Aurial of Darluse Wood, the original writer of Sacred Memories, was a parchment maker of unsurpassed skill in the south of England during the early part of the 7th century. In this dark time of ignorance and illiteracy, he had the good fortune to be raised, educated, and trained in his craft by a kindly and wise order of monks after the misfortune of losing his parents to a plague at the age of three.

From early childhood, Aurial spent many hours each day in the verdant forest of Darluse Wood. Feeling kin to its wildlife, majestic trees, and lush vegetation, he absorbed the spirit and wisdom of nature.

At the age of 26, he met Master Armaton of the Society of Folk. Under his tutelage, Aurial would confront his destiny: to visit Folk Space in the 11th dimension, write this book describing his experiences, and bequeath it to someone from his future so that you could have the opportunity to read it.

The Folk have long lived in kinship and service to Mother Earth. They keep close watch on the planet's condition in the Palace Arbortorium, a multidimensional facsimile of all its ecosystems. Anticipating the severe imbalance we have seen come to pass, the Folk chose Aurial to set a plan in motion to begin a correction. It involved the repercussions of actions Aurial would take upon his return to earth in the year 626 and also what he would write.

While in Folk Space, Aurial attended a Royal Council in Converse Hall on the planet Maroth, a surrogate for Mother Earth, where all her extinct species go to continue their existence. Also attending: Mother Earth herself, to address the Council and also you, the reader, through her words recorded in Sacred Memories. She describes the foreseen imbalance from her perspective, how it feels, how it impacts her, what she does to alleviate the consequences for mankind ... and, after a point, what she will no longer be able to do on our behalf. It is a message of the greatest importance: what we must know to change what we do and how we think in order to save, not her, but ourselves.

This is a critical moment, a time when, as Master Armaton writes in the foreword, "Mankind will experience a 'great shift' in awareness signifying the end of the world as it is perceived. When this time is nigh, survival of the human race would come into peril and Sacred Memories will issue forth."

Will you take heed?