Made 'Em Cry: The Wartime & Lifetime Experiences of One of the Not-ordinary Men 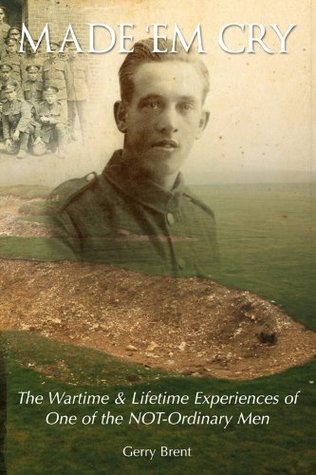 These are extraordinary and vivid true stories from the First World War through the eyes of a soldier. It is illustrated with maps, photographs and documents depicting George Ellis' remarkable early life. George Ellis was a countryman from Essex who served in the latter stages of the First World War. He was a tough, taciturn man who spoke little of his early life experiences which remained almost entirely unknown to his immediate family. Like many others who experienced the dreadful events of War he began to talk about his early life following his retirement, unfolding dramatic reminiscences of astounding wartime experiences. Since hearing these remarkable stories, the author has travelled to Belgium and France to follow in the footsteps of George and his Regiment, as well as to research the accurate context of the place to write a factually accurate and truly fascinating account. These stories, so extraordinary and vivid, detail not just the War but of George's youthful involvement in a farm worker's strike, the little known Army Occupation of Germany, and his liking for female companionship, presenting an appeal to anyone interested in general early 20th Century history as well as the First World War. The book provides details of rural events in North Essex against the background of a young man growing up in the early part of the previous century and how he came to fight in a Regiment bearing no geographical connection to the area with which he was familiar.

After a career in the pig industry, both in the UK and overseas, Gerry Brent received the David Black Award for services to the British pig industry in 2004. The author of four pig industry textbooks discovered that none of his Uncle's family knew anything of their relatives' early life experiences which had been recounted to him. This caused him to conduct wider research in order to gain fuller detail of George Ellis' life so that these vivid, and hitherto untold, reminiscences might be told to a wider audience and serve as a record of those not-ordinary people who went to War in the early 20th Century.