Behind The Closers: An Interview With Ben Gay III 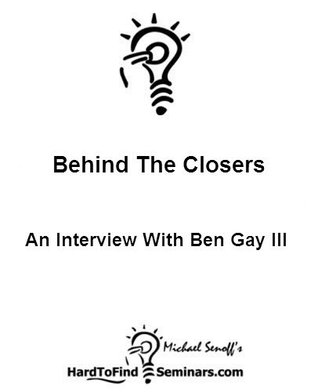 Ben Gay III is a world-renowned sales trainer and author of The Closers. He’s worked with marketing giants like Earl Nightingale, Zig Ziglar and Ray Considine, and has helped countless businesses increase their sales performances.

Although Ben ran a prison program for five years called People Builders that taught prisoners and staff alike how to set and achieve goals, it wasn’t until he was sent to prison himself that he learned some of the most valuable lessons about business and life.

So in this audio, you’ll hear Ben’s incredible story about how he was railroaded on multi-level marketing charges and sent off to prison – but how he took his sales training with him to help the people around him turn their lives around – all while virtually running his business from behind bars.
You’ll Also Hear…
• The truth behind Ben’s indictment and the one mistake he made that got him 15 years in prison
• What Ben knows about Earl Nightingale that most people don’t
• Secret techniques Ben’s learned from Ray Considine for networking in even the strangest of places
• The cheap trick Ben’s wife used that almost bankrupted his business while he was in prison and how he got it all back
• An "almost magic" way to command respect anywhere – Ben had everyone calling him “Mr. Gay” in prison – even the guards
• The one-and-only proven-effective sentence to use in marketing that gets a name out there, even when no one has heard of it

It would have been easy for Ben to just sit around and do his time for the six years he was in prison, but instead he took “his show on the road” and taught everyone he came in contact with how to effectively turn even the most negative of situations into a positive.